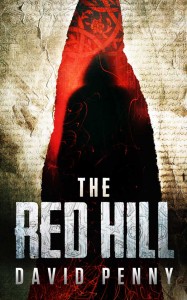 I was unable to complete the interview for the next book by a finalist for the M.M. Bennetts Award, but here’s the review. The book is The Red Hill, by David Penny. This book was a revelation to me for several reasons.

The setting is fifteenth-century Moorish Spain, in the final years before the fall of the last parcels of Islamic Spain. Thomas Berrington, an Englishman serving as physician to the Sultan of Granada (or Gharnatah as Penny spells it, following the Moorish pronunciations that would have been in use at the time), finds himself with an unexpected task – finding out who has been committing a series of gruesome murders within the walls of the Alhambra itself.

I rarely read mysteries these days, so it was a treat for me to get back into the pleasures of mystery reading – watching for clues, trying to outthink the protagonist, all the while enjoying the benefits of characterization and setting. In this book, the main character is richly characterized, with a range of secondary characters who provide good balance to his strengths and weaknesses. There’s a host of potential suspects, and the setting is rich in detail.

Several things set this book apart for me. One was the variety of characters. I have read that Moorish Spain was a remarkably diverse location, and Penny takes full advantage of that diversity, populating the novel with a wide range of characters. Of particular interest is Thomas’s partner in detection, a palace eunuch named Jorge. Penny avoids the cliché of medieval historical fiction and makes Jorge an interesting, complicated character, rather than a creature defined by his difference. The book also effectively conveys the reality of life in an absolute monarchy, where the whim of the Sultan carries the power of life and death.

The Red Hill takes a few liberties with the actual history of the era, which Penny carefully points out in his afterword. But in terms of capturing the feel of a time and place, the book does a marvelous job of conjuring up the last days of Islamic Spain, with a dandy murder mystery as the driving force of the plot.

You can learn more about David Penny on his website and order the book here.