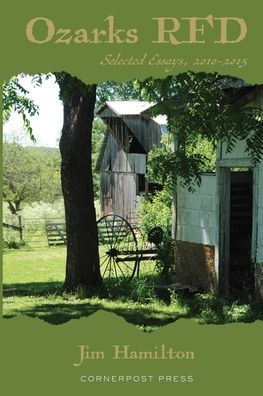 The newspaper column is a surprisingly difficult genre: strict word count limits, inflexible deadlines, and the necessity to be both original and familiar to a broad spectrum of readers. Jim Hamilton is a master practitioner of the form. For more than forty years, he wrote columns for the Buffalo Reflex, and a collection of his early columns, River of Used to Be, holds a valued place on my bookshelf. Now comes a new collection, Ozarks RFD: Selected Essays 2010-2015, taken from the most recent decade and published by a new press.

Readers of a certain age will remember when writing a newspaper column was a prestigious perch reserved for those who had proved themselves to be exemplary reporters and writers. On the national scene, Mike Royko, Molly Ivins, Jimmy Breslin, and others swayed political debates. In the Ozarks, Jean Bell Mosley and Thomza Zimmerman, Leonard Hall, and Sue Hubbell reported from their homes and farmsteads on the rhythms of life in nature and community. Hamilton’s columns are in that vein – observant, nostalgic, rarely offering comment on current events.

That doesn’t mean they are shallow, though. The columns regularly steer through emotional shoals. Hamilton writes with painful honesty about losing a wife to cancer and a daughter to a car crash, and about the more general disasters that befall a nation and a community. Faithful dogs and treasured fishing holes inhabit these pages, but so do wars and calamities.

I suspect, though, that the columns most readers will respond to are his reminiscences of childhood in the Ozarks. Hamilton has a gift for memory that reveals itself through precision; the word pictures in these columns are detailed, vivid, and evocative. Perhaps one of the signs of love is noticing, and if that’s the case these columns are just about as loving as one can get these days. Jim Hamilton seems to have noticed, and remembered, everything that ever happened to him.

Is there repetition among them? Sure. One of the pitfalls of a newspaper column is the obligation to produce material on deadline, again and again, week after week, and no columnist escapes the repetition trap forever. But even when he’s returning to a familiar subject or theme, Hamilton finds a way to approach it in a different way, shedding light from a different angle. Still, as with all collections of columns, these are best read in modest amounts. A newspaper column is literature in bite-sized form; as with all bite-sized things, they are better enjoyed when consumed at a moderate pace.

Hamilton’s columns capture a moment, dig deep into a memory, analyze an emotion. Each column is a finely crafted exploration of an experience or recollection, and although you can see their origins in the deadline-driven world of newspaper production, they transcend those origins and offer us lasting insights. There’s both sweetness and precision in these columns, a combination that is hard to pull off and even harder to sustain. This collection of work is a real joy.

I’ve been thinking about Ozark anthologies lately, and have been re-reading a couple. Ozark, Ozark, edited by Miller Williams, came out in 1981. I have a vague recollection of being an intern at the University of Missouri Press when this book was in production, but I don’t believe I worked on any of it, except perhaps for helping to proofread the Acknowledgements page or something equally forgettable. That’s too bad, because I would like to be able to claim some small amount of credit for this very memorable anthology.

Williams employed a sort-of chronological approach in this anthology, organizing by author birthdate starting in 1869 and ending in 1949. Like all structures, this approach both confines and provides framing; there’s no Schoolcraft or Turnbo, but the early- to mid-part of the century is well represented. Vance Randolph is in there, along with Ward Dorrance and Donald Harington. But I’m more taken by the less-familiar names in the collection, authors I hadn’t known before: Don West, Jack Butler. Some people I’ve known personally are welcome inhJabitants of these pages: Speer Morgan, Eugene Warren (who writes as Eugene Doty nowadays), Jim Bogan, Paul Johnson, Walter Bargen. An occasional ringer fills out the pages as well, like Langston Hughes, who yes was born in Joplin, making him an Ozarker by birth, but who high-tailed it for Mexico, Europe, and New York as quick as he got the chance.

I particularly like the inclusion of some accomplished newspaper columnists in the anthology. The newspaper column is a demanding craft, with strict word counts and unforgiving deadlines, and it’s easy to become a hack at it. Even the best columnists occasionally write a bad one, but the good ones somehow manage to find grace or insight in the everyday rhythms of life. The Jean Bell Mosely/Thomza Zimmerman alternating column, “From Dawn to Dusk,” which appeared in Cape Girardeau newspapers and was syndicated regionally for 21 years, was such a column. So too were the columns of Jim Hamilton, the longtime editor of the Buffalo Reflex, who later collected some of his best ones in a book entitled River of Used to Be, which is one of the prizes on my shelf. We don’t have selections from either of those in this anthology, but we do have columns from Leonard Hall and Roy Reed, and a short magazine piece from Harry Minetree.

The anthology is a reflection of its time, overwhelmingly male and white, and that’s a weakness. I also spotted a few errors in the introduction and notes, but despite those difficulties, Ozark Ozark: A Hillside Reader is still a pleasure to dip into. It’s out of print, as far as I can tell, but used copies can be found for not too outrageous a price.