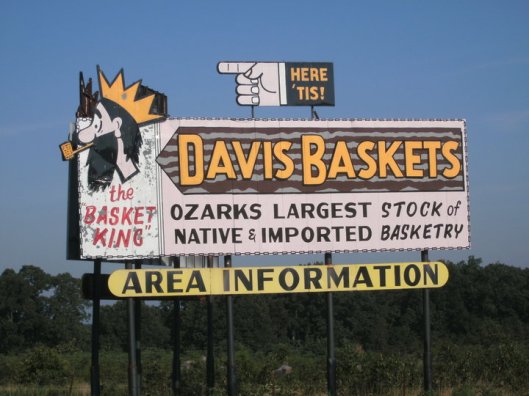 Davis Baskets is the real deal — an old-fashioned “roadside attraction” on U.S. 54 south of Camdenton. Anybody who’s ever driven from the Lake of the Ozarks to Springfield has noticed it, no doubt. You might even have stopped in to use the restroom, and to browse the stacks of comical signs, postcards, hats, plaques, toys, souvenirs, and God-knows-what. And of course baskets.

I’m told that it was founded in 1949 by Delmar Davis, who still runs the place today at 88. I was told all this because if you do stop in, as I did earlier this year (I needed a new hat for float trips), Delmar Davis will start talking to you and will not stop till you are out the door. He’s an immensely friendly gentleman with a million stories and opinions, a World War II veteran with a zest for history. In an era when people just want to reach their destination with as little deviation or delay as possible, Davis Baskets is a reminder that stopping along the way can be as rewarding as getting there.

And just south of Davis Baskets is Macks Creek, where unexpected stops on the highway used to be the town’s primary industry . . . but that’s another story, as they say.