On Facebook, I’ve been following the progress of Thomas Peters’ book on radio station KWTO and the Ozark Jubilee with great interest. It’s going to be a great addition to the Ozarks history bookshelf! He’s been posting some of the photos he’s collected for the book, and this morning he posted this beauty: 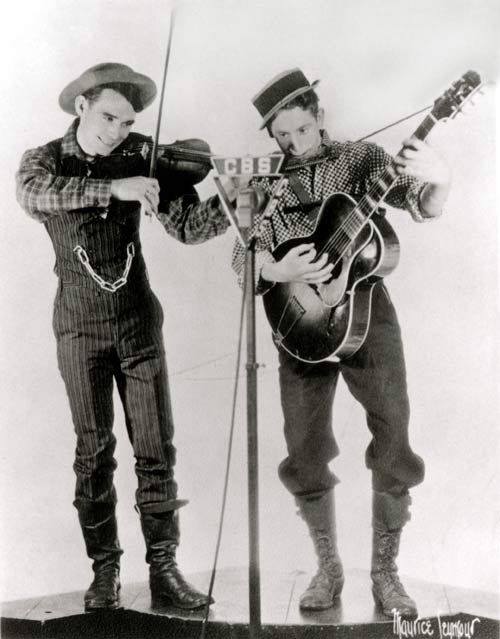 That’s an 18-year-old Les Paul on the right, performing with his friend Sunny Joe Wolverton on KWTO as the Ozark Apple Knockers. A far cry from the urbane, sophisticated jazz pioneer he later became, the occupant of more halls of fame than one would care to count. Everybody has to start somewhere, and for Paul it was playing hillbilly music under the stage name “Rhubarb Red.”

When I saw this picture, for some reason I thought of a movie I had recently rewatched, the Coen Brothers’ The Ballad of Buster Scruggs. Buster (Tim Blake Nelson) opens the movie in full cowboy-movie garb, singing “Cool Water” as he rides through Monument Valley. Of course, the joke (or part of the joke) is that “Cool Water” is not a historic cowboy song at all, but a pop hit of the 1940s. 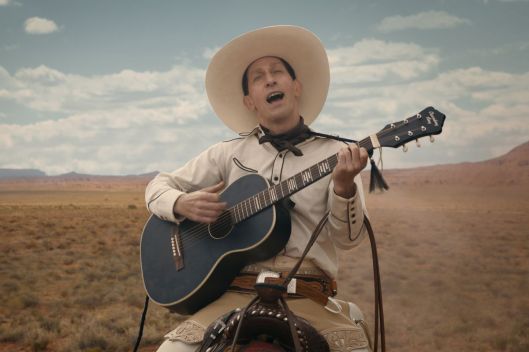 What follows is a series of ghastly/comic episodes that both play on Western-story stereotypes and embrace them, just as the “hillbilly” image both mocks, uses, and embraces that stereotype as well.

We make art where we find it, with the materials at hand. Sometimes those materials include simplified versions of ourselves, and then we must decide whether to challenge the stereotype or play with it. I think either decision can work, as long as the stereotype is approached with conscious intent. It’s when stereotypes are presented unconsciously and uncritically that they harm. The rural rustic, the hayseed, has been with us since Greek comedy, and we will probably never get rid of it. So we might as well play with that image as we move toward the larger points we are trying to make in our literary and creative work.

What truly prompted me toward these thoughts, though, was the news that the former Dogpatch USA property had been bought by Johnny Morris of Bass Pro Shops fame. I’ve never met Johnny, although some friends of mine know him and speak very highly of him. While Bass Pro is the business that made him a billionaire, it’s the other Morris properties that play the Ozark stereotypes: Big Cedar Lodge, Top of the Rock golf course, and Dogwood Canyon (which is owned by a linked foundation). These properties present a sanitized, tidied-up version of the mythic Ozarks that people just love and are willing to pay handsomely to experience; a single-day admission to Dogwood Canyon will set you back $20, and it’s another $32 to ride the tram. Assuming you brought your own bicycle or are up for the walk, you can see a mill, an Indian burial cave, a wilderness chapel, some waterfalls, a trapper’s cabin, and other sites, all skillfully manufactured and manicured to achieve a perfect match of product and expectation.

This is progress, I suppose. The old Dogpatch attraction played on an earlier generation of stereotypes, barefoot hillbillies and moonshine stills. It will be interesting to see what becomes of it under its new owner. I’m guessing it won’t stray far from the formula that has made the other attractions so popular. 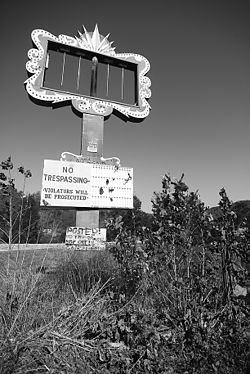